Home » Technology » How to Grow Bamboo in Minecraft? Uses of Minecraft Bamboo
Technology

How to Grow Bamboo in Minecraft? Uses of Minecraft Bamboo


Bamboo is the fastest growing plant in the world – and so is the case in Minecraft. Bamboo Minecraft is very useful – and chances are you already know some of it, here is a sneak peek into its details!

Minecraft has continued to interest players since its early inception in 2011 and it has been very successful for the entire decade, and it is stepping into a new decade with more than 120 million users that are all active!

Originally developed by Mojang, this is a game that has not gone out of style and is continuing to fascinate users, because, within itself, it provides a delicate and adventurous world full of fun, frolic and excitement.

Like in the real world, even in the world of Minecraft, Bamboo Minecraft is a plant that is found in jungles. The common uses of Bamboo Minecraft include cooking, smelting, scaffolding, making sticks or breeding pandas. Now, it goes without saying Bamboo Minecraft is known for a number of uses – but it is not to be confused with sugarcane, which was colloquially sometimes known as Bamboo!

The most interesting thing about Bamboo Minecraft is simply that it can be the fastest growing plant in the game, well it after all is! Wondering where to find bamboo in Minecraft? Let’s get to the next part.

How to grow bamboo Minecraft?

Well, you can have bamboo right in front of you but you’ll need to use the right tools to obtain it – or else, it is as good as nothing. You can mine bamboo Minecraft with any tool – but if you want to mine it in a quick span of time, the fastest and most reliable way to do it is through an axe or a sword.

If you’re playing on the Java edition, you can break a bamboo Minecraft instantly – using a sword. And, in the Bedrock edition, if that’s your version – a sword will break bamboo faster than an axe, in question, but not immediately, as you would be able to in the Java edition. 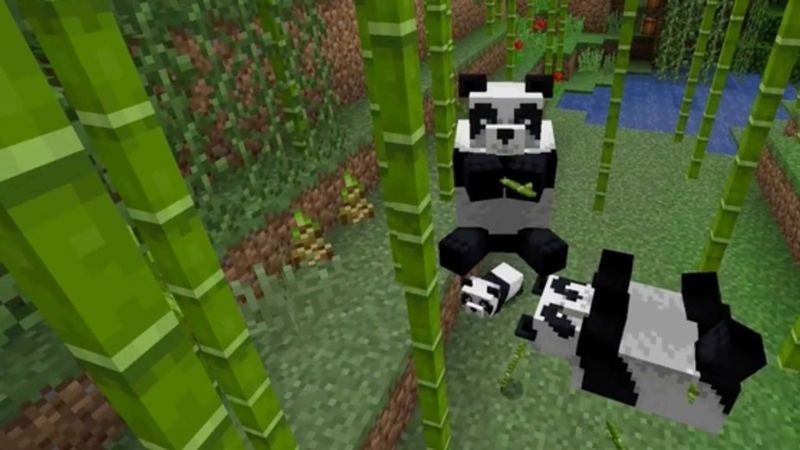 You can find Minecraft Bamboo in jungle biomes, in widely scattered single shoot variants. If you want to find much more dense plantations of bamboo Minecraft, you can find them in jungles, which span over large parts of the landscape.

You’ll find bamboo Minecraft when you’re fishing – yes, you heard us right – but that will happen in jungle biomes, and it can be found as a junk item.

You can also find Minecraft bamboo in a shipwreck as well as Jungle Temple supply chests. 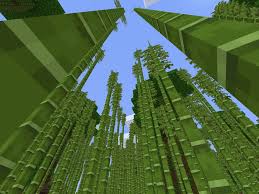 You can use Minecraft bamboo for doing farming. You can plant them on red sand, sand, podzol, mycelium, coarse dirt, gravel, grass blocks or dirt. At the default tick speed of 3, each plant would grow approximately every 204.8 seconds or 4096 game ticks. It will grow another 1-2 blocks when you use bone meal on it. Bamboo can grow as tall as 12 to 16 blocks.

You’ll need to be at a high level of 9 or so, for the top of the bamboo plant to grow. Now, because bamboo breaks in the same way as sugarcane, a sugarcane farm can be adapted to do the same. The advantage of using such a farm is the use of no water for the harvest, but having spacing done.

One important use of Minecraft bamboo is using it as fuel in furnaces, and each bamboo Minecraft would smelt 0.25 items, so if you craft two bamboos, and use that as fuel, it is equivalent 0.5 items. If you craft bamboo into scaffolding, you can smelt 12 items (JE) or 36 items (BR) from 6 bamboos. Under normal circumstances, the same amount of Minecraft bamboo would only smelt 1.5 items – isn’t that funny?

This is more for decoration purposes, and you can place Minecraft bamboo in flower pots, where it retains its design and appearance.

Bamboos are what is eaten by pandas, and if you have baby pandas and you’re looking to speed up their growth – you can do so by feeding them bamboos. You can also use Minecraft bamboo to breed pandas – and you can do so by having 8 blocks of bamboo, within 5 blocks of the pandas, so that the panda is the only animal in Minecraft that has additional breeding requirements when compared to others. The player can also feed Minecraft bamboo to pandas so that they mate, and have a baby thereafter.

The appearance of a bamboo Minecraft changes as it grows – and I mean, of course, you’d expect that! When you first place it, after crafting, it will take the form of a small shoot. If it grows one block taller, it will be two pixels in length, and at two blocks, it will have leaves coming off it.

Like ferns, grass and sweet berry bushes, Minecraft bamboo is the only plant that will change their hitboxes as and when they grow. It is also one of the few plants that cannot be processed by a composter, along with other dead bushes, potatoes, chorus fruits that are usually poisonous in nature.

How to Make and Use Kelp in Minecraft

How to Make & Use a Minecraft Smoker

4 Growth-Minded Tools Every Small Business Should Have

Expert Tips on How to Improve Clinical Workflow

We will be happy to hear your thoughts

Price Pickup is an online store where you can find the best Amazon products related to diffrent niches.

We know that it is hard to find the awesome products on Amazon that suits your needs best. You spend hours if not days researching your desired product on Amazon but none fits your needs. We are here to help you.